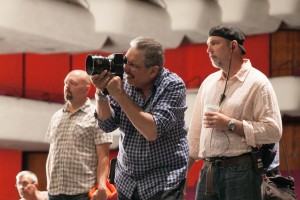 Fred Murphy and Jo Throckmorton line up the next shot for a commercial.

Hello, I’m Jo Throckmorton and I am an Assistant Director.  I am a proud member of the DGA and work throughout the 3rd Area on TV commercials.  I am a 1st AD in the DGA.

I have been in the business since 1991 – starting as the Promotions Manager working with Producer’s Sarah Green and Maggie Renzi on the John Sayles film, City of Hope.  I went on to work in feature films in New York City before taking on content development and production for Time-Warner in Cincinnati, Ohio. 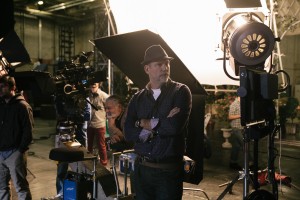 I have worked as an Assistant Director since 1996 and have experience in feature film work as well as commercial production.  I have worked in the media business since 1988 and have an extensive background in providing creative services for all forms of media production.  My clients have been both big (Fortune 100) and small, but I treat them all the same – as my most valued customer.

I extend my skills beyond just Assistant Directing, and produce a large number of commercial productions each year.  I have secured the services of highly esteemed cinematographers such as Fred Murphy (ABC-TV’s, The Good Wife, and the film Hoosiers) and Academy Award Nominated Jack N. Green (Unforgiven, 40-Year-Old Virgin, Hot Tub Time Machine, 50 First Dates).

Jo Throckmorton talking with Jack N. Green as they set up the next shot.

When not working on a project as an Assistant Director, I teach media production techniques and studio production at the university-level as an adjunct faculty member at Indiana University in Bloomington, Indiana.  I also conduct seminars and classes on video and filmmaking.  From 1995 to 2006, I worked with a production company in Indianapolis as the Creative Director and eventually as President before choosing to set out on my own.

My years of experience in media has given me a proven record of delivering creative and production services for film, video, multimedia and web projects.  I am an experienced writer of non-broadcast/corporate video & TV commercial scripts.  I also work through Blue Ace Media as a Project Manager should you need a full-service media production company.